Following a chance trial flying lesson in 1980, Diana found her true passion in life, and specifically the wonderful world of aerobatics. The following year - with a mere 60 hours of flying to her credit - she bravely embarked on a new career in competition aerobatics.

Over the next five years, Diana progressed from the basic manoeuvres of Standard level, right through to Unlimited contests, where complex multi-figure manoeuvres and negative 'G' are the order of the day.

She competed as often as time allowed in the UK and France, initially in the CAP 10B two-seat trainer, and then in the more capable single-seat CAP 21.

In 1986, having held a Private Pilot's Licence for just six years, Diana revived the status of British women in the sphere of international aerobatics by being the first since 1970 to represent her country at a World Championship - when it was held in the UK at South Cerney. She went on to fly as a member of the British Team at both European and World contests for another ten years, four of which as team captain, competing additionally as an individual in the Spanish and Argentine Masters.

Her campaign of competitive flying also extended to Eastern Europe and North America, and she gained numerous awards en-route. Solo navigation on the many long transit flights - in the days before GPS and with no aids other than a magnetic compass - she freely admits were often just as challenging as the contests themselves!

Top-level competition flying, by its very nature, imposes extremely high 'G'-forces, with figures of +8 or -7 being by no means unusual. To cope with these demands, Diana upgraded her aircraft; first to an Extra 230 and then to the phenomenal Extra 260. The latter was specially built for her in 1991, and due to the power-to-weight ratio of its welded steel/carbon-fibre construction and Monty Barratt-tuned 6 cylinder engine, it remains a competitive aircraft to this day. 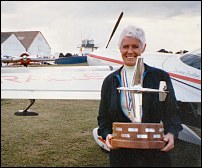 In 1995, Diana became the first woman in history to claim the title of British Aerobatic Champion.

The European Pilots' Federation awarded her 'Woman of the Year', and she also holds a coveted Royal Aero Club Silver Medal.

Diana was awarded an MBE in the 2021 New Year's Honour List for services to Aerobatics and to Charity. 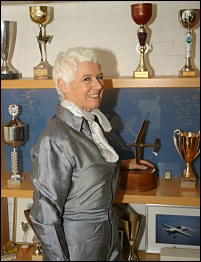 Diana's other achievements include: